The Portlaoise BC light welter beat Ukraine’s Denys Pesotskyi this afternoon to book a place in Friday’s semi-finals.

Today’s win is Kelly’s third in three days and his second over a Ukrainian opponent as the host nation are doubling, trebling and even quadrupling up in some limits.

The fight was stopped in round 2 with both boxers needing attention from ringside medics for cuts. Kelly, who was cut near his right eye, won on points when it went back to the judges.

The Westmeath southpaw, bearing the scars of previous battles this week, picked off his shots and kept his composure in the face of Denys Pesotskyi’s aggression. The final scores read 20-18 x 3 to Kelly and 20-18 x 2 for his battling opponent.

Nothing is going to keep Kelly out of the ring tomorrow and he’s gunning for his fourth win in four days.

Earlier today, Dublin’s Emmet Brennan and Cork’s Tommy Hyde lost out in their bids to reach the last eight.

Brennan, despite taking a count late in the third, finished well versus Ivan Papakyn but the Ukraine middle probably won the first two rounds of the 75kg clash.

Hyde also took a harsh standing count in the second, shortly after he received attention to a cut near his left eye following an accidental clash of heads versus Ukrainian light-heavy Dannylo Zhasan.

The Mayfield BC man finished the first round with hooks off both hands and had his opponent on the ropes and was troubling the physically imposing Ukrainian No. 2 with his backhand. 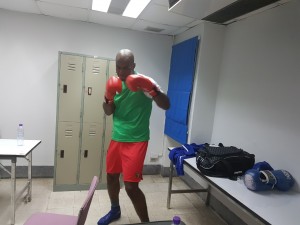 Neither man engaged much in a tactical start to the second with Hyde needing attention to the cut after a skirmish at around 1.20 into the frame.The third was also tight.

Athlone heavyweight Kenny Ogungboa looked as if he was going to stop Eshish Husain early in the first round but the Jordanian heavyweight, who soaked up a lot of leather inside the opening 20 seconds, weathered the early onslaught and finished out a slugfest on the front foot.

Neither man had to go looking for each other, while Okungbowa’s cause wasn’t helped after he received a public warning for dropping his head in the second round.

Two of the judges scored it a draw and the other three went against Okungboa who won his last 16 fight in Odessa yesterday.

“This game, it’s a roller coaster. You’re up one minute and down the next,” said Irish coach Jimmy Halpin who is working Ireland’s corner with head coach Eoin Pluck.