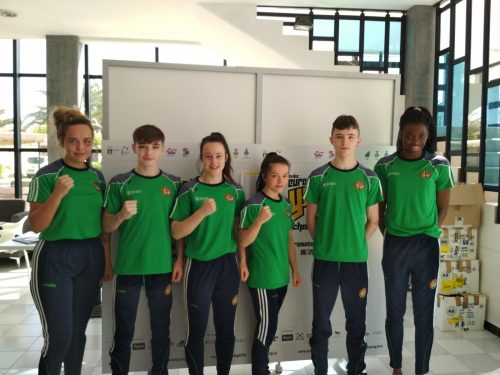 Beschastnova’s jab was effective enough this afternoon, but her single shots were never going to be enough against the maurding Moorehouse who kept stepping inside the longer reach of her opponent to deliver two and three-punch combinations in all three rounds.

Dearbhla Rooney Slovakia’s found the target with big shots to edge two-time European Junior champion Jessica Triebelova 3-2 in the final round of today’s feather final, but the counter-punching Slovak was ahead on all cards going into the final frame. 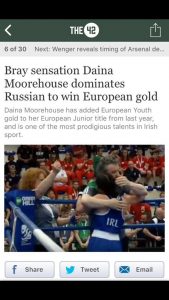 Rooney, who, along with the Irish corner, was shaking her head after taking standing counts – when she was on the attack – from innocuous punches in the first and in the second before winning the third. Finals scores – 29-27,29-27,29-27,30-27,30-27 to Slovakia

Evelyn Igharo lost to England’s European Junior champion Gemma Richardson in the light-welter final. Igharo, who fought bravely throughout, was beaten on a unanimous decision over three, three minute rounds. Big performance from the Irish champion against a world class opponent. Final scores – 30-27,30-25,30-26,29-28,30-26 to England.

Dean Clancy, the last Irish boxer in action in Italy, was beaten on by England’s Ivan Price. A close three-rounder, Price earned a unanimous decision to take the 52kg  gold against the stylish Sligo flyweight.

Team Ireland are due home via Dublin Airport at .35pm tomorrow afternoon (Terminal 2).