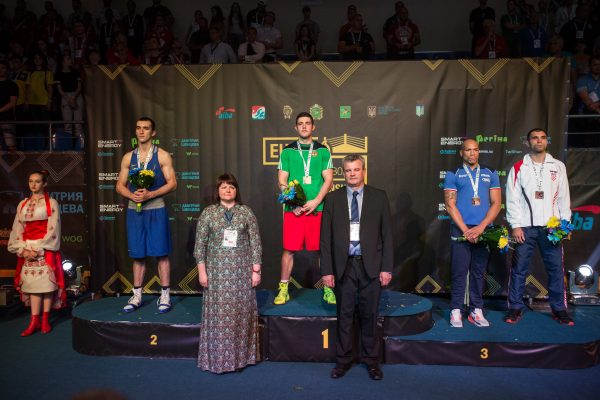 Joe Ward on top of the podium in Kharkiv in Saturday 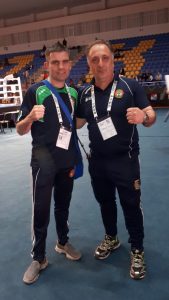 High-Performance Director Bernard Dunne and head coach Zaur Antia in the Ukraine. Both men helped steer Irish boxing to another top five finish in the medals table at the European Championships

The 42nd edition of Europeans also acted as a qualifier for the 19th World Championships which begin in Hamburg, Germany on  August 25th.

Ward, Irvine, Walker and McComb qualified for Germany in Kharkiv.

The qualification process for the World Championships is now almost complete following Kharkiv and the African qualifiers in Brazzaville, Congo this weekend.

280 boxers will compete at the World Championships.260 of those places are earned through the qualification process.10 places go to the host nation and there are 10 wild cards.

Meanwhile, Irish boxing has claimed 14 gold medals at the Men’s and Women’s European Championships this century. Katie Taylor (6) and Joe Ward (3) lead the way with nine between them.