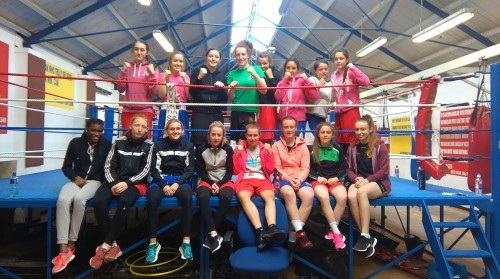 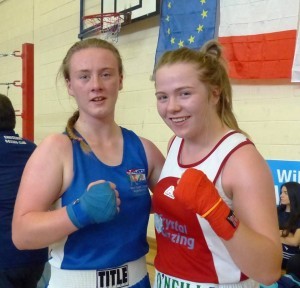 Roisin Gannon (Connemara) and Katelyn Phelan (St Brigid’s, Kildare) after their semi-final at the Esker BC All Female Box Cup.

Fifteen girls were invited to train in the High Performance Unit at the Stadium over the past months.The sessions were lead by Jim Moore and Jimmy Payne ably assisted by Antoinette Faye,Noel Burke  and Jimmy Halpin and all the coaches are delighted with the progress the girls have made in that time, reports Irish team manager Bernie Harold.

There was disappointment when there were no entries in the Queens Cup in the Youth 81KG  class and we had to withdraw Aoibhe Carabine from Geesala. News over the past week brought more disappointment  with the forced withdrawal of Katelyn Phelan of St Brigids, Kildare. Katelyn  was in superb form after winning the Esker Box Cup against very stiff competition and also being named Best Boxer. But, unfortunately, she has picked up virus. The team all wish Katelyn a speedy recovery.

Stepping into the breach will be Connemara boxer, Roisin Gannon who has travelled the very long distance to the HPU for training and richly deserves her chance. 2015 National Girl 4 Champion Roisin missed out on the 2016 National Championships as she was injured in a riding accident.

She has been training hard in the HPU over the past weeks and we wish her well in her International debut. The team will be training in the High Performance Unit on next weekend the 22nd & 23 October and will travel to Germany on Tuesday morning the 25th.