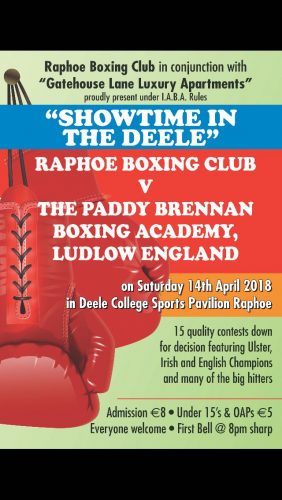 Brennan, whose dad hailed from Lifford, and his club received an MBE in 2015, the highest possible award for voluntary service to over 2,000 young people in the UK.

The visitors will be under the guidance of the flamboyant Paddy Farrell, who has strong Dublin connections, on April 14.

Matchmaker Gary McCullagh has once again come up trumps with 15 quality contest down for decision featuring many Ulster, Irish and English champions and many of the big hitters.

The mid-April tournament is the return leg from last November when the Raphoe BC were edged out 9-7 by the Paddy Hyland Academy in Birmingham. 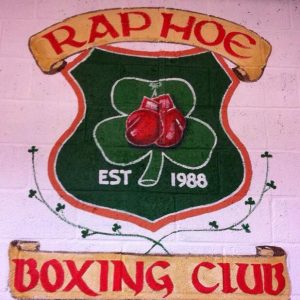 Peter O’Donnell, President of the Donegal Board and Secretary at the Raphoe BC, is looking forward to a top night of boxing.

“The last meeting was close and we’re expecting more of the same on Saturday week, “said O’Donnell who was one of the founding members of the Raphoe BC 30 years ago.

“The night will feature Ulster, Irish and English champions. It promises to be a very competitive evening of boxing between which will further strengthen the relationship between both clubs.”

Patrons are asked to be in their seats early as a bumper crowd is expected.

Admission is keenly priced at €8 and €5 for under 16 years and OAPs.