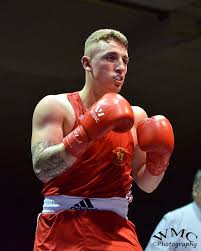 It has been a whirlwind 57 days for St Francis BC heavyweight Kevin Sheehy, pictured.

The Shannonsider claimed a National Senior belt on December 1 at the National Stadium.

And he followed that up with a top of the podium finish at the National U/22 Championships last Saturday.

Sheehy, who had Ken Moore and Jimmy Moore working his corner at the home of Irish boxing, beat Jake Patterson and James Clarke in both finals.

In between collecting Irish belts, Sheehy also scooped the Limerick Young Sports Star of the Month award for December. 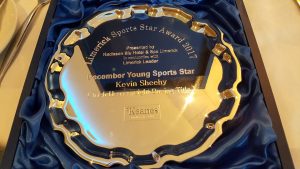 He’s now in line for selection on the Irish squad for March’s European U/22 Men’s Championships in Romania.

The new champion has his eye on the big prize in Irish 91kg boxing –  and the 32nd Olympiad.

“I’m just trying to win as much as I can. Each one is as tough as the other, he said.

“I do see myself as Elite champion, that’s the goal. I want to be Elite champion, that’s what we’re working toward and going to the Olympics. All these Championships are stepping stones and trying to win each one to get there,” added the St Francis BC stand out who represented Ireland at the World Youths in St Petersburg, Russia in November 2016.