Ceire Smith got Ireland off to an emphatic winning start at the 12th European Women’s Elite Championships in Madrid today.

The Cavan flyweight stopped Hungary’s Krisztina Beri in the second round to progress to the last 16 in the 51kg class.

Smith has her hand raised in victory today

Smith, who used her backhand to solid effect in the first, dropped the brave Magyar with a left hook in the second and her opponent took another count from another left moments after visiting the canvas. The ref waved it off after Beri took a third count from a righ near the end of the frame.

Smith will be back between the ropes tomorrow versus Turkey Naz Buse Cakiroglu.

The Istanbul-based southpaw, who receive a bye into the last 16, claimed gold at the European Games in Minsk earlier this summer and is the No. 1 seed in the 51kg class in Madrid. 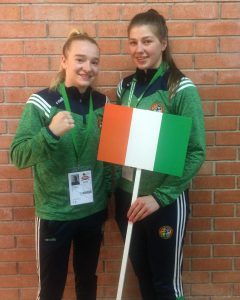 Meanwhile, Roscommon middle Aoife O’Rourke fights for at least bronze on Monday versus Tetiana Petrovich of Ukraine while current Dundalk’s European U/22 champion Amy Broadhurst is in against Dominika Ciklova in the lightweight class.

Broadhurst and O’Rourke are in action in the 1st sessions which begins at 1.30pm (Irish time).

Cork’s Christina Desmond, a 2016 European bronze medallist, is in against Dutch welter Anna Van Leeuwen on Tuesday at the 31-nation tournament.