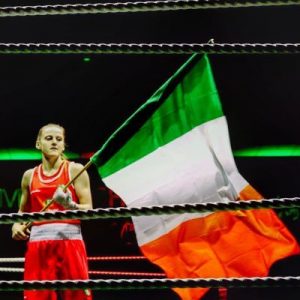 Michaela Walsh got Ireland off to a winning start versus the USA at the Strandja multi-nations in Bulgaria today.

The Antrim feather beat Gutierrez Guadaloupe on points in Sofia and will be back between the ropes tomorrow to meet Spain’s Jenifer Fernandez for a place in the last eight.

Roscommon middle Aoife O’Rourke, the current European champion, made it 2 and 0 for Ireland in a points win over Sweden’s to book her ticket into the quarter-finals.

Meanwhile, Dublin light-welter George Bates advanced to the last 16 after an impressive win over French southpaw Lounes Hamraoui who received a public warning for an infringement in the third round.

The 2013 World Elite champion was on the floor in the second round but that was ruled a slip. However, O’Griofa’s left hook appeared to help him on his way in an engaging 91+kg clash in which both men found the target with clean shots.

Emmet Brennan was beaten on points by Ukrainian light heavyweight Stepan Hrekul but Kiril Afansev beat Belgium heavyweight Victor Schelstraette, – a former pro boxer (3-0-0) who has returned to the amateurs from the paid code – after a close 91kg encounter.

Thirteen Irish boxers, including all of the athletes that won their last 32 bouts today, will be back between the ropes tomorrow.