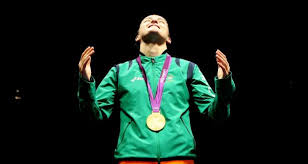 The backbeat to Katie Taylor’s intense rivalry with Russia’s Sofya Ochigava began at the 41st Usti Grand Prix in the Czech Republic in 2010.

It ended in the 2012 Olympic lightweight final in London amid a frenetic atmosphere at the ExCel Arena.

Ochigave was adjudged to have won the Usti Grand Prix semi-final 8-1 – despite Taylor finding the target at least three times in the opening 30 seconds under the old computer scoring system – and Russia believed they finally had the women to dethrone the Bray lightweight.

But it proved to be a false dawn as Taylor bounced back to beat Ochigava 10-5 in the 2011 European final in Rotterdam, Netherlands.

And she also beat the Moscow Oblast southpaw 11-7 in the 2012 World final in Qinhuangdao, China.

Both women were on opposite sides of the 60kg draw at London 2012 where women’s boxing made its Olympic debut.

As anticipated, both swept aside all opposition en route to their fourth meeting inside two years in the English capital.

The Olympic final was tight; Taylor, who had her dad Pete and current Irish head coach Zaur Antia in her corner, scoring with her trademark combinations; Ochigava’s backhand a constant threat.

The Russian two-time world champion was 4-3 ahead – the first finished 2-2 – going in the third round, but Ireland’s five-time World titlist won the round 4-1 to take a 7-5 advantage into the final round.

Ochigava, who had thrown in a cheeky Ali shuffle earlier in the fight, went all-in on the front foot in the fourth and anxiety-ridden final frame.

That stanza finished 3-3, and Taylor, after an agonising delay of about 40 seconds was declared the London 2012 women’s 60kg champion on a score of 10-8 from a fight which was basically won and lost in the third round.

Taylor’s Bray BC team-mate Adam Nolan and Darren O’Neill recorded one win each at the Games and reached the last 16.

Athens 2004 Olympian Andy Lee, the only Irish boxer besides John Joe Joyce and Paddy Barnes to bow out of the Olympics on a countback, described Taylor’s Olympic gold as unquantifiable for women’s sport in Ireland.

“It’s unquantifiable, the effect that she has had on young girls. Not just in Ireland but all over the world, that if they work hard and believe in themselves, that they can go on and achieve their goals, just like she has done,” he said.

The London 2012 victory is quantifiable in one respect, however, as the Girls 1,2,3,4,5,6 Championships is now one of the biggest tournaments on the IABA domestic calendar.

There are no prizes for guessing who the vast majority of young female prospects cite as their main inspiration.