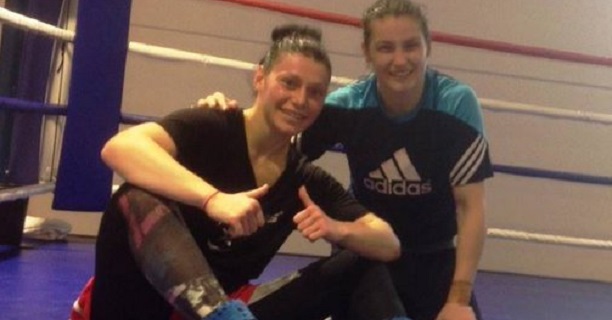 Taylor and Ochigava after a spar in Dublin

Taylor beat the Russian southpaw in the 60kg Olympic final to bridge the 20-year gap since Michael Carruth’s gold medal victory at Barcelona 1992.

The fight, however, wasn’t for the faint-hearted, with Ochigava, Taylor’s greatest rival, battling the Bray woman all the way down to the wire in a tense four-rounder amid a frenetic atmosphere.

Taylor’s hand was eventually raised in victory, but the 40-second delay between the final bell and decision wasn’t exactly conducive to anyone of a nervous disposition.

The win was Taylor’s third straight victory over Ochigava as she beat the Moscow Oblast puncher in the 2012 and 2011 World and European finals.

Ochigava holds a points decision over the Wicklow orthodox from the 2010 Usti Grand Prix semi-final in the Czech Republic.

Both women put their intense rivalry aside in 2016 with Ochigava travelling to Dublin to help Taylor prepare for Rio 2016.

The pair could meet in the pro ranks as Ochigava is 3 and 0 in the other code.

Ireland, courtesy of Taylor, Nevin, Barnes and Conlan, finished in joint fifth spot in the medals table with Kazakhstan at the 30th Olympiad.