Team Ireland continue their build up toward the Queens Cup in Stralsund, Germany in the High Performance Unit at Dublin’s National Stadium under coaches Jimmy Payne, Antoinette Faye and Noel Burke.

There will be further sessions this weekend the 15th & 16th October at the home of Irish boxing. Arrival time 10:30am – on the floor for 11am.

Team Ireland will be well prepared for the upcoming tournament, according to team manager Bernie Harold.

“This new initiative of bringing the girls in under the High Performance Unit is already showing dividends with all round improved skills, agility and fitness. This also offers the opportunity for the girls to develop to a higher standard and participate in international competition,” she said. 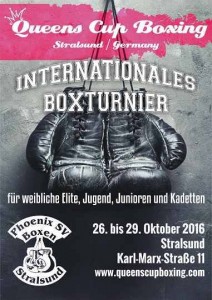 Ireland has claimed quite a few medals in Stralsund, most notably at the 2014 edition of the Cup.

Amy Broadhurst and Chayanne O’Neill won double Youth gold two years ago and Joanne Richards, who is included on the 2016 squad, and Natasha Logan won double Junior gold on the same day.