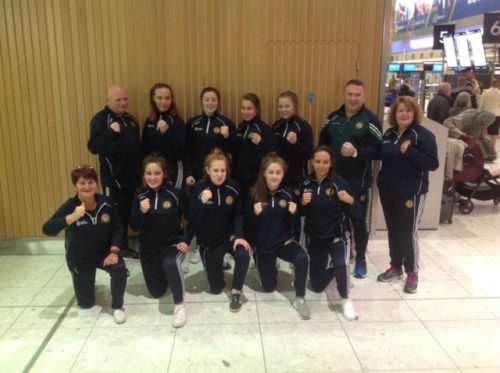 Team Ireland departed for India this morning ahead of the opening bell for the 2017 World Women’s Youth Championships in Guwahati on Sunday.

Over 30 nations represented by almost 200 boxers are registered to compete in the fifth edition of the competition.

The entry suggests that most weights will be initially contested on a last-16 basis.

The 2017 edition of the tournament is the first stand alone World Women’s Youths as all previous tournaments were held in conjunction with the World Junior Championships.

Four places are also up for grabs in four weights – fly, feather, light and middle – at next year’s Youth Olympics in Buenos Aires, Argentina.

Feather is an addition to the three Olympic weights for women from the last Youth Olympics in China in 2014.

The inclusion of feather also suggests that the limit – and one other weight – will be added to the three existing weights for  women for Toyko 2020.

Meantime, the draw for the 2017 World Youths will be made Saturday.Boxing begins 24 hours later at the Nabin Indoor Stadium (times yet to be confirmed).

The 2,000 capacity Nabin Indoor venue will also act as a training base for teams.

India is the final outing of the year for Irish boxing in World and European competition.

27 medals have been claimed by Ireland’s male and female boxers so far since last June.