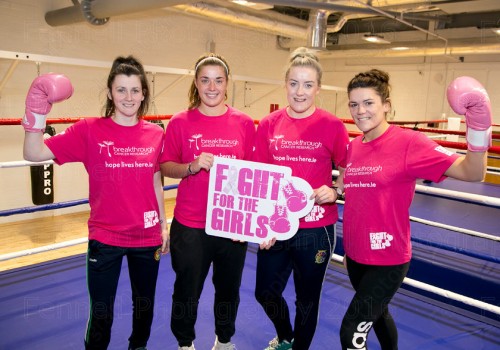 Women’s Championship hopes are Fighting for the Girls this Autumn!

Members of the Irish Women’s Elite team took time out of their hectic training schedule for the upcoming European Women’s Elite Championship to support the Breakthrough Cancer Research’s ‘Fight for the Girls’ campaign. The campaign is asking gyms and clubs across Ireland to hold a class in aid of cancer research this autumn and join the fight against cancers affecting women. All proceeds will go towards finding new treatment options for the leading cancers affecting women, such as ovarian cancer.

Orla Dolan, Fundraising Director with Breakthrough states, ‘We are delighted to have the girls support our Fight for the Girls campaign. With 360 women diagnosed with ovarian cancer each year and 276 women dying from the disease, more treatment options are urgently needed. While there have been many advances in the diagnosis and treatment of many other cancers, ovarian cancer has had little improvement in its prognosis over the last 20 years. That’s why campaigns such as Fight for the Girls and the support of Irish Women’s Elite Team are so important as we need to do more to ensure that women have more treatment options and a better survival rate for this disease’.

Members of the Irish Women’s Elite team – Donna Barr (51kg), Sauna O’Keefe (60kg) Gráinne Walsh (69kg) and Christina Desmond (75kg) – are part of an eight-strong squad who will compete in the European Women’s Elite Championship taking place in Sofia, Bulgaria from 14th to 24th November 2016. The 10th edition of the tournament is the final AIBA ranking event of the year. The squad have completed a training camp at the Irish Institute of Sport in Abbotstown and at Institute of Sport in Sheffield, UK where they were training with the England, Wales and Team GB to prepare for the Championships.

Orla continued, ‘I’d like to wish Donna, Shauna, Gráinne and Christina all the best in the upcoming Championship. They are already champions to us for supporting this campaign and helping raise much needed funds for research into cancers affecting women. You can join the Irish Women’s Elite Squad and support the Fight for the Girls Campaign by holding a fitness classes in exchange for a donation or add €2 from your classes such as Boxercise or Spinning for the month of November and December.’

Breakthrough is leading the way with research into cancers with poor prognosis such as ovarian, pancreatic, lung and oesophageal. They have already progressed seven treatments progress from their research laboratory to clinical trial and work closely with multiple hospitals to ensure their research is responding to the needs of patients with cancers that do not respond to conventional therapies.

To get involved call 021 4226655 or email Jesse@breakthroughcancerresearch.ie.

Notes to the Editor

About the Irish Women’s Elite Team

will compete in their weight class at the European Women’s Elite Championship taking place in Sofia, Bulgaria from 14th to 24th November 2016. The 10th edition of the tournament is the final AIBA ranking event of the year. The Squad have completed a training camp at the Irish Institute of Sport in Abbotstown.

Breakthrough Cancer Research (Breakthrough) is the official fundraising body for the Cork Cancer Research Centre, who have been leading research into cancers with a poor prognosis, such as pancreatic, lung and oesophageal since 1999. Breakthrough facilitate excellence in research by bringing scientists and clinicians together to collaborate with the aim of discovering and developing new effective treatments and cures for patients in Ireland, Europe and Internationally. For more information see www.breakthroughcancerresearch.ie and follow us on Facebook https://www.facebook.com/BreakthroughCancerResearch and Twitter @BreakthroCancer.