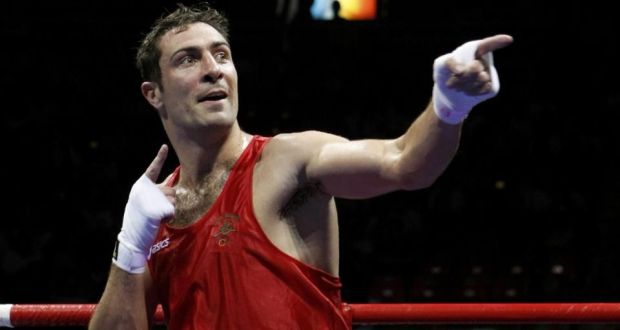 Ken Egan reckons it’s difficult to win a first title – but even harder to retain it. The Olympic finalist, who reached 13 Elite finals on the trot, will be back at the home of Irish boxing for the 2019 finals on February 23 for what he describes as a special night. “I was around a long time, I was lucky to get as long as I did out of it. You need a big of luck whether it is in the Senior (Elites) or the Olympic Games,” said the Dublin southpaw yesterday.

Please scroll down for 2018 interview.

The only Irish boxer to claim ten consecutive National Elite belts believes you have to remain in your own zone to become a champion.

Ken Egan reckons that a second belt is the hardest to win but that leaving the National Stadium with any title is always a special moment, regardless of what number it is.

Between February 10, 2001, when he beat Cork’s Kevin Walsh (St Colman’s BC) on his Elite debut at middleweight, and March 5, 2010, when he beat  Belfast’s Tommy McCarthy (Oliver Plunkett BC)  in the light-heavy final, Egan reigned supreme after posting 22 victories on the bounce in two different weights.

However, the Beijing 2008 silver medalist admitted that his remarkable sequence of victories, which looks unlikely to be equaled any time soon, almost bit the dust during a see-saw quarter-final under the old computer scoring system 16 years ago.

“In 2002, I boxed Leon Senior and I won 14-13, so that could have been my run of ten out the window, said the three-time European Union Elite champion reflecting on his most difficult encounters.

“It was a close one, but he was a good boxer. I beat Marvin Lee and Conall Carmichael. Darren O’Neill was another tough opponent. He was coming on strong,” added the Neilstown BC southpaw.

“Obviously, Joe Ward who beat me, but out of the ones that I won, I’d say it (toughest opponent) would have to be Leon in 2002. It was such a close fight.”

“Winning the second one is always the hardest. After winning your first title the expectations are on you again to win your second, all eyes are on you,” continued the former AIBA World No. 3 ranked light-heavy.

“Olympic year is also very important and the pressure is on. In 2004, the pressure was on to win that year and again in 2008. Olympic year can add a bit of spice to the Seniors. People start coming out of the woodwork, people start moving up and down weights.

“The Olympic years are the exciting ones, but it’s always nice to win the title. I won the Juniors, Intermediates and Seniors the first year (he’s the only Irish boxer to achieve that particular hat-trick). It was a fantastic achievement for me as I’d only just turned 19. I won two at middle and I moved up to light-heavy in 2003.

Egan will be back at the venue he graced and dominated in the first decade of this century this Saturday night for the Liffey Crane 2018 finals and he had well-earned advice for boxers making their debuts in Saturday’s finals at the home of Irish boxing.

“Finals always add pressure and expectations, having your friends come and see you. Stay in your own zone, control the controllable as they say, said Egan who was coached by Gerry Fleming and staff at the Neilstown club.

“Forget about everything, forget about the distractions outside the ring. Get the first round under your belt which is very important. Put everything into your first round and try and finish the third round at as high an intensity as you had in the first.”

Ken Egan (Neilstown BC) – Ten of the Best