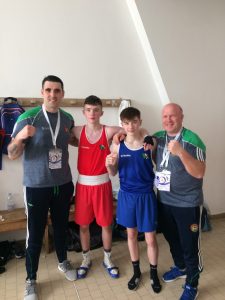 Edward Donovan and Callum Walsh bowed out the European Youth Championships at the last 16 stage in Italy tonight.

Donovan lost on a 4-1 split to Hungary’s Konstantin Barbosu after three tight rounds which could have gone either way in the welter class.

Both men receiving warnings for dropping their heads in the 2nd and 3rd rounds of a contest in which the pair landed plenty of leather. Big performance from Donovan against the 2014 European Schoolboy champion.

The Rebel County lefty, the current European Junior champion, repeatedly stung the current World Junior champion in the first round and edged rounds two and three against his talented opponent. However, the 4-1 split verdict went against the Irish light-welter.

Earlier today, Jude Gallagher, Dean Clancy and Brandon McCarthy advanced in the 49kg, 52kg and 56kg classes on unanimous decisions over the Ukraine, Turkey and England.

Gallagher was involved in a fiery three-rounder with Kiev southpaw Ali Dagly, the Irish fly, whose cleaner shots took the day, winning the first round on all five cards and the second and third 4-1.

Clancy was on top in all three frames against his Murat Ugurlu, the national champion slipping home some neat shots off both hands – and showcasing some outrageous evasive manoeuvres – in the first two frames before earning two 10-8 scores in the final stanza to seal a comprehensive win.

McCarthy beat England’s Joe Tyres 30-27 across the board. The Kildare bantam set his stall out early in this match between two former Monkstown Box Cup champions and found the target with a neat left inside the first 30 seconds, followed by a clean combination. McCarthy more or less sealed the win after taking the second round 10-9 on all cards. 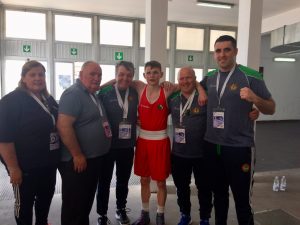 Five Irish are between the ropes tomorrow. Caitlin Fryers and Mary Geraghty compete in the last 16. Dean Clancy, Aibhe Carrabine and Edward Barrett are one win each away from at least bronze in the last-eight.