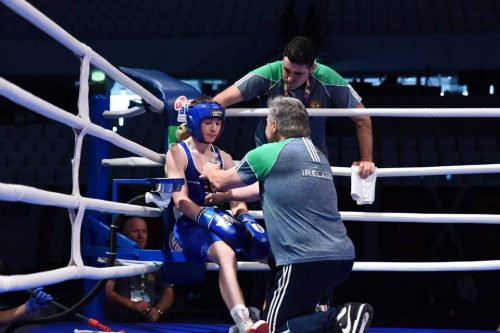 The Two Castles BC man claimed his first Irish Elite belt at flyweight in November just a few weeks after his 18th birthday and also scooped the Best Male Boxer Award.

He’s now moved up a notch to 57kg for his three-rounder with the St George’s BC stand out.

“This is a good time for me to move up in weight and go into these Ulster Elites, Gallagher told today’s Irish News.

“I know I’ll be strong enough and I’ll use everything to my advantage from moving up – my speed, my skill, and I do still have the power for 57. I’m as big as any 57, so it won’t make a big difference.”

The Warrenpoint siblings are both in action tonight versus Monkstown’s Darryl Clarke and Star’s Lee McKee this evening.

“The two boys have been with us a few years now, and they’re coming on well,” said Storey.

“Rory fought James McGivern in the semi-final last year and gave him a great fight. He’s improved since then so hopefully, he can show what he can do.

“Everybody wants to try and get to the Ulster Hall – that’s the big prize. That’s why, for me, the Ulster seniors is still special. I still get a real kick out of it.”

A second session will be decided on Thursday night at the Devenish Complex.

The Ulster Elite finals will be decided at the Ulster Hall next Tuesday.