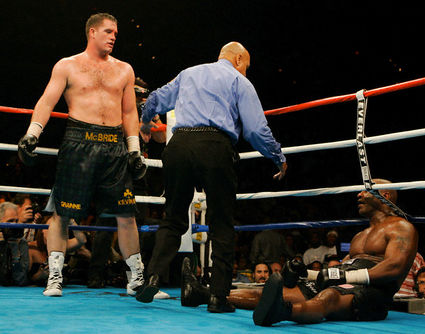 Down and Out. Kevin McBride ends Mike Tyson’s career

Mike Tyson’s conqueror Kevin McBribe has been named honorary Irish captain for three meetings between the USA and Ireland in the USA this month.

Boston-based McBride, who stopped Tyson in Tyson’s last fight in Washington in 2005, will lead out Team Ireland.

Both nations meet in Boston next Monday, Springfield on March 15 and New Hampshire on March 21.

The full Irish squad, led by head coach Zaur Antia, is will be confirmed later today.

The Irish panel will be drawn from last month’s National Elite Championships. Ireland leave for the USA on Thursday.

Former Irish head coach, Billy Walsh, now chief seconds with the USA, has named a top team for the series.

Monaghan-native McBride, who stopped Mike Tyson in Tyson’s last fight in 2005, keeps a close eye on the Irish boxing scene.

“I’m honoured to be carrying the Irish flag for these fighters. I know some of the Irish coaches and I still support boxing in Ireland as well as America,” said the ex Irish Olympian.

Ward, who was involved epic trilogy with the late Arturo Gatti in 2002/03, said being named honorary USA skipper versus Ireland is “especially exciting for me as an Irish-American.”