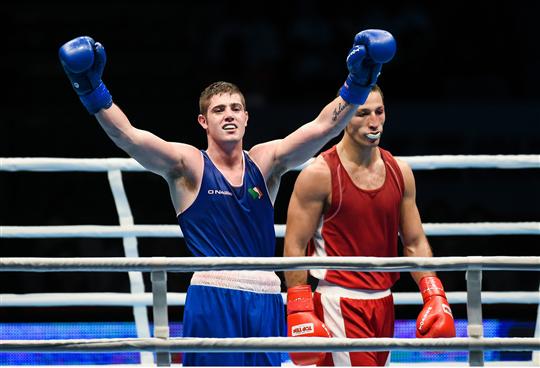 Joe Ward is on course for his third European Elite gold after beating Valentino Manfredonia in today’s light-heavy semi-final in Kharkiv, Ukraine.

The Moate BC southpaw scored a unanimous decision over the Italian and is one win away from a unique hat-trick.

Manfredonia picked up a knee injury in the first round and bravely fought on, but Ward always looked the more likely and boxed well within himself in the three rounds to upgrade his guaranteed bronze to at least silver..

Earlier, Brendan Irvine and Kurt Walker had to settle for bronze today after losing out on unanimous decisions at the semi-final stage to England and Ukraine

Irvine was beaten by Niall Dean Farrell in the flyweight class and Walker lost to Ukraine’s Mykola Butsenko earlier today.

Team Ireland are due home at 10.50pm via Dublin Airport on Sunday night.