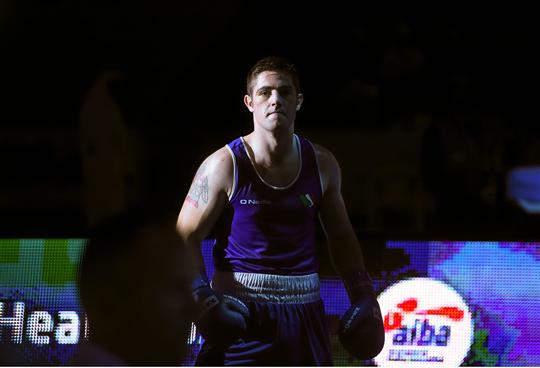 Joe Ward is through to his third successive World Elite quarter-final at the 2017 edition of the tournament in Hamburg, Germany.

But his fellow Rio Olympian Brendan Irvine and Dean Gardiner bowed out at the last 16 stage today following cracking bouts with Korea and Columbia.

Ward cruised to a unanimous decision over Georgia’s Iago Kizira after producing a master class, particularly in the second round.

The Westmeath southpaw, a bronze and silver medal winner at the 2013 and 2015 Worlds, will now meet Mikhail Dauhaliavets of Belarus in the last-eight tomorrow with at least bronze up for grabs.

Earlier today, Gardiner was unlucky to exit on a 3-2 split to Columbia’s Cristian Salcedo today. A see-saw super-heavy bout ebbed and flowed all the way down to the final bell, but the No. 4 seed got the nod.

Irvine was involved in an explosive 52kg contest with Korean southpaw Inkyu Kim before losing out on a unanimous decision. The Belfast flyweight made a great start to the third round and had his opponent on the backfoot but went down under a right hook.

Ward is the last Irish boxer left in the tournament in Hamburg.

Dauhaliavets, who lost twice to Ward in the past, beat Italy’s Valentino Manfredonia today. Irish ref Ben McGarrigle was the third man in the ring for the bout.