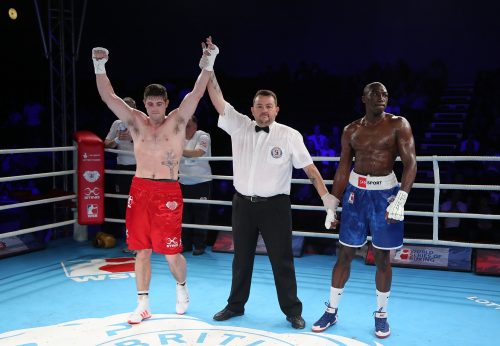 Joe Ward has his hand raised in victory

Joe Ward will line out for the British Lionhearts in the 2nd leg of their World Series of Boxing (WSB) semi-final with the Astana Arlans in Kazakhstan.

The current European Elite light heavy champion and World Elite finalist meets an opponent to be confirmed on May 25 in Atyrau City.

Both sides go head-to-head in the first leg in Sheffield on May 15.

Ward is enjoying his second term with the Lionhearts and will be targeting his fourth straight victory of 2018 against the former champions in the away leg.

“That’s the plan, four wins. I have three so far and it’s really going well for me. I’m top of the leader board and it’ been a good tournament for me so far,” said the three-time European Elite champion who occupies No.1 position in the 81kg WSB Individual rankings.

In the event of a 5-5 draw in the semi-finals, the welterweight division will decide the match in a  tie-break.

Ward believes that they’ll need a solid victory in Sheffield to take to Central Asia.

“It will probably have to be 5-0. It’s going to be tough in Kazakhstan as they’re one of the top boxing nations in the world, he added.

“I’ll be focusing on my own performance and on getting my fourth win of the season.”

The St Michael’s Athy BC lightweight helped lead the Kazakh side to the title that year.