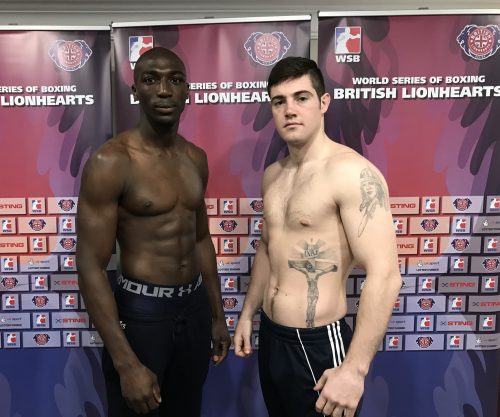 Joe Ward and Cuba’s Olympic champion Julio La Cruz are joint top of the World Series of Boxing Individual light-heavy rankings after recording wins in Wales and Colombia over the weekend.

Ward, lining out for the British Lionhearts and with Irish head coach Zaur Antia in his corner, scored an inside the distance win over France’s Bakary Diabra, pictured above and below with Ward, in Newport.

The Westmeath southpaw KO’d Diabra, who was undefeated after two fights going into the five-rounder, 50 seconds into the 5th round to help the British Lionhearts to a 3-2 win over the French Fighting Roosters. 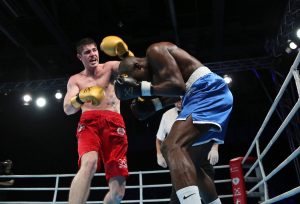 Ward and La Cruz have earned a maximum 15 points each in the 81kg rankings with the top three qualifying for the 2019 World Championships and Tokyo 2020 qualifiers at the end of the WSB season.

Ward has won three from three so far this season and has yet to drop a round after 15 stanzas of boxing.

“I was happy enough with my performance and the stoppage,” said three-time European champion Ward who will be back in WSB action next month.