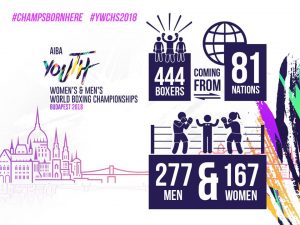 Ireland occupies 8th position in the World Youth Men’s Youth Championships table since Mexico 2008 with the countdown to the 2018 edition of the tournament beginning in earnest this week.

Boxing at the 2018 World Youths begins in Budapest, Hungary next Tuesday. A 7-strong squad will represent Ireland.

This year marks the first occasion that the competition is a joint male and female event.

Irish female boxing has claimed 1 silver and 5 bronze at this level since the inaugural World Women’s Youths in Turkey in 2011.

Caitlin Fryers finished in one of those podium position and Irish head coach Billy McClean believes she’ll impress in Hungary.

“Caitlin’s a little star who trains extremely hard – she’s extremely dedicated, one of the hardest trainers we have in the programme at the minute,” McClean told the Irish News.

“Already she has a wealth of international experience and the thing about Caitlin is she won’t be afraid of anybody in these World championships, no matter who she gets.

“She’s very focused, she’s been in the system for a number of years now, and she’s definitely a potential medallist.”

Team Ireland are putting the finishing touches to their preparations at the High-Performance Centre in Abbotstown and leave for Budapest on Tuesday.

227 men and 167 women are registered to compete in the Hungarian capital.