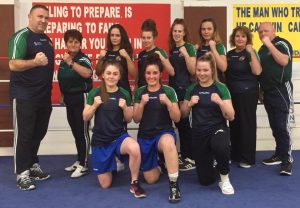 Irish boxing is gearing up for another key weekend in top international competition.

Katelynn Phelan and Caitlin Fryers are between the ropes in the semi-finals of the World Women’s Youth Championships in Guwahati,India.

Phelan, a 2015 European Junior bronze medallist, is first up Friday and will be aiming to upgrade her guaranteed bronze to at least silver versus Ekaterina Dynnik.

She edged out Ireland’s Shauna O’Callaghan in the 2015 European Junior final in Hungary and in the 2015 World Junior quarter-final in Chinese-Taipei, winning 2-1 on split decisions on both occasions.

The Kazakh secured bronze at the 2015 World Juniors and reached the Ahmert Comert Youth final in Turkey earlier this year.

Please click here for Friday’s schedule. Saturday’s program has yet to be published.

The Irish squad trained this afternoon ahead of the weekend’s last-four deciders. 19 nations are represented in the semi-finals.

Meantime, Irish boxing has now won 29 medals in World and European level at all levels – male and female – from Elite to Junior/Schoolboy since June of this year.

The colour of two of those medals will be determined this weekend in the final World and European outing of 2017 for Irish boxing.