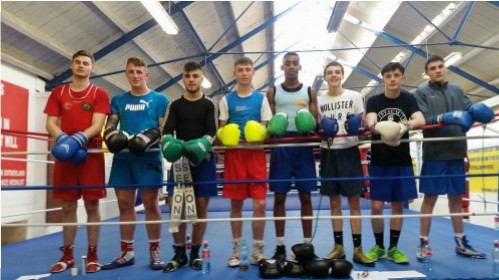 Team Ireland begin their second training camp ahead of next month’s AIBA World Youth Championships in St Petersburg Russia at the University of Ulster in Belfast tomorrow.

The squad, who finished up a training camp at Dublin’s National Stadium last weekend, are scheduled to train and spar with Ulster, England and Scotland in Jordanstown until October 29th.

The nine-strong panel will have a final camp with Russia and Cuba in Moscow from November 3rd to 14th before travelling to St Petersburg by rail from the Russian capital.

Team Ireland leave for Belfast from the National Stadium tomorrow morning ahead of their camp with Ulster, England and Scotland. All four sides meet in a test match on October 27th.

“The boys had a great training camp in Dublin and they’re ready for Belfast now. They’ll see plenty of action at the University of Ulster in the build up to the World Youth Championships,” said Irish coach Billy McClean who will be working Ireland’s corner with John Conlan in St Petersburg.

Brett McGinty is looking forward to the challange in Russia’s second largest city and a busy 2017 between the ropes and in the classroom.

“I’m glad to be here. From the start of the year my main objective was to get on the team for the World Youths,” the 18-year-old, who attends Deele College in Donegal, told the Irish News.

“After Christmas then there’s the Ulster seniors and the Irish seniors so I’ll be entering them. I’ve a busy year ahead because I’m doing the Leaving Cert as well, but I’d like to make my mark in the seniors.

“It has opened up a bit for the younger age group. We were chatting about that this week, how open most of the weights are. Obviously you still have a lot of the top guys there but as far as chances go, it’s a big, big year for us all.”

Boxing at the 2016 World Youths begins on November 17 at the 7,120 capacity Sibur Arena which will also act as a training venue for the duration of the tournament.