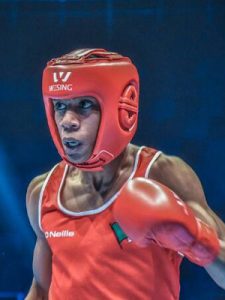 Gabriel Dossen will be aiming to get amongst the medals and Amy Broadhurst and Aoife O’Rourke are planning to upgrade their guaranteed bronze medals in the last-eight and last-four of the European U/22 Championships in Targu Jiu, Romania tomorrow.

O’Rourke is in against Italy’s Carlotta Paoletti in the middleweight division.

Dossen is the first Irish boxer in action Thursday in the male middleweight division versus Georgia’s Giorge Kharabadze.

The Irish female duo are between the ropes in the evening session which begins at 4pm (Irish time). Click here for program.

Dundalk medal-magnet Broadhurst was delighted to post a decision over an AIBA World Elite ranked opponent.

“So to beat her was a big relief and am delighted! I’ve never boxed this French girl before but I know her from over the years.

“She is a good boxer, so I have another tough one on my hands tomorrow.”

Shannon Sweeney bowed out today after a fine performance in the light-fly class.