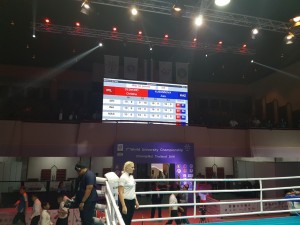 The verdicts guarantee Irish boxing its first ever medals at this level.

“Absolutely delighted with the win, I always felt in control and hopefully I can make the final now,” said current Irish Elite champion Desmond after her convincing victory. 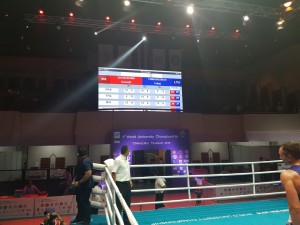 Okungbowa, who rattld his opponent with a big shot in the first, was involved in a very tight affair with Tamasuskas, who needed attention for a cut in the second round. The Irish Elite finalist needed precautionary attention to nicks over both eyes after the fight, Irish coach Paddy Gallagher confirmed.

The injuries were described as superficial by medics.

Both Desmond and Okungbowa will be aiming to upgrade to at least silver on Thursday versus Poland and France.

Ceire Smith and Gary McKenna are in action tomorrow morning (Irish time) in the last-eight of the tournament.  The Irish pair are between the ropes in the 2nd and 5th bouts on the program which begins at 8am (Irish time).