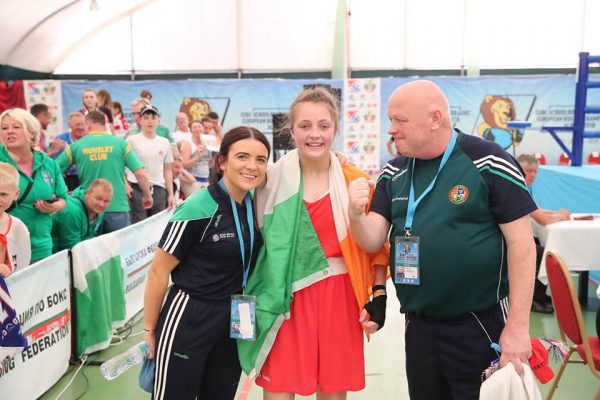 The 31-strong panel re-wrote the history books at the 16th edition of the tournament since the inaugural event in Rome in 2003 and the first competition at this level to feature females.

Ireland’s previous best, in terms of gold, was Anapa (Russia) 2012 where three gold medals were secured.

Ireland finished 2nd in the medals table at the 27-nation tournament – Russia, Ireland and England, in that order, topped the table. 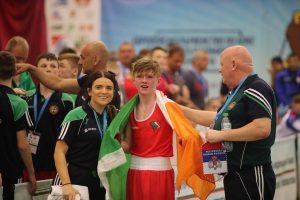 Ireland finished second in the rankings table – Russia, Ireland and England, in that order, topped the table

The class of 2018 also broke through the all-time 100-medal ceiling for Irish boxing at the Black Sea resort. Prior to Albena, the count was 89 medals. It’s now 103.

Speaking at the Airport this morning, Dom O’Rourke, IABA President who was with the squad in Bulgaria, hailed the performances of the Ireland panel.

Echoing those accolades, Fergal Carruth, CEO of IABA, at the Airport to welcome the team home with IABA Registrar Stephen Connolly, IABA Secretary Art O’Brien, Anna Moore of the IABA Ladies Commission who does tremendous work on behalf of female boxing, Paddy Gallagher, a leading figure in schoolboy boxing, and Peter O’Donnell, President of the Donegal Board, said the squad did Irish boxing proud.

Family members, club coaches, clubs and friends were also at Terminal to welcome the boys and girls in green home. 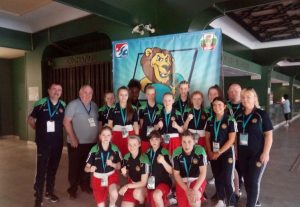 Working on occasions when two boxers were between the ropes simultaneously in Rings A and B and when Ireland were involved in up to 12 bouts on daily schedules, the Irish corner and staff delivered.

Ireland won 30 of 57 contest in Bulgaria.

Referee and Judge Brian Wallace was Ireland’s third person in the ring and officiated in many preliminary contests and two finals.

Meantime, the Irish medallists in Bulgaria join an illustrious group of Irish athletes who have finished in podium positions at this level over the last 15 years.