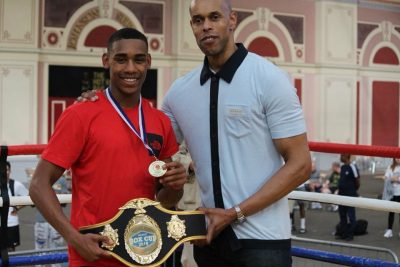 Dossen was also presented with the Best Male Boxer Award at Alexandria Palace.

“He’s Semi Final he beat Joshua Gustave from Fairbairn BC London who the Boxing News described him as dangerous and hard hitting so we knew it wasn’t going to be easy but Gabriel dealt with well and outboxed him.

“The Final was tricky because both boxers had similar styles and was a very entertaining final and thankfully Gabriel came out on top.

“Gabriel getting best Male boxer of the tournament is a testament on how good his performances was all weekend, Delighted for him and the club it was my first time back in his corner competitively since the National U22 Championships last February.”

Hyde, meantime,  hammered out his own hat-trick over three days, the Rebel County light-heavy beating Dean Freeman, Leon Nihell and Manny Essex in the 81kg class.

Dossen and Hyde didn’t drop a round in the English capital.

Irish University boxing also made a huge impression in London.

“This is my first Elite tournament so I was delighted to get three good wins against tough and older opponents, said Hyde who is now boxing out of the Mayfield BC.

“I’m still only filling into 81kg but I feel very strong and I think that showed in the final against a big strong guy. I’m learning all the time. I’m very happy with the performances and the great experience from this weekend.

“This is my second trip with Gerry O’Mahony and the rest of the Dungarvan lads; they look after us big time. I’m with Danny Fitzpatrick in Mayfield the last two months and I can feel an unreal improvement already. He’s brilliant.”