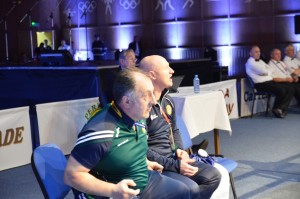 Irish Elite champion Kurt Walker and Jordan Moore stretched Ireland’s unbeaten run to three on the bounce at the European U/22 Championships in Braila, Romania today.

Both men took four of the five judges with them in 4-1 verdicts, Moore beating Andry Tyshkavenko of the Ukraine 4-1 and Walker following that up on an identical verdict over Adrian Powal of Poland.

The Leinster and Ulster light-fly and bantam will now meet Raffaele di Serio of Italy and England’s William Cawley in the last 16 and quarter-finals.