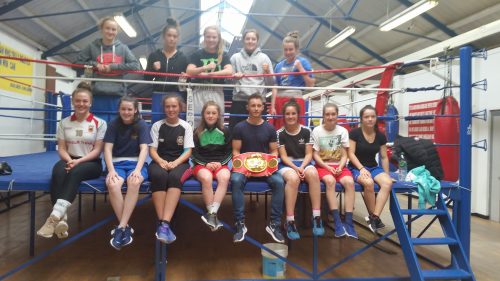 Make that a double!

Aoibhe Carabine claimed a second European gold for Ireland this afternoon following an inside the distance win at the European Youth and Junior Championships in Sofia, Bulgaria today.

The Geesala BC middleweight TKO’d Dziyans Novikava of Belarus in the first round in the 75kg Junior final.

Novikava took a standing count early in the frame and the ref called a halt after the talented eastern European middle took another count.

Earlier, Daina Moorehouse was bouncing around the ring in celebration after the ref raised her hand to confirm that Ireland has a new European champion.

A tight and entertaining final, Moorehouse, who boxes out of the Enniskerry BC, worked hard from opening to closing bell to take all three rounds.

The new European champions won three fights each in four days en route to the top of their respective podiums in Sofia.

Team Ireland are due home at approximately 4pm tomorrow via Dublin Airport.

Ireland will be bringing home two gold, one silver and three bronze medals for Sofia.