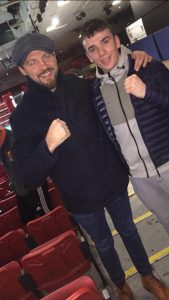 Kieran Molloy, pictured with Andy Lee, will be aiming to end over half a century of waiting when he meets talented Holy Family BC (Drogheda) welter Eugene McKeever for the vacant Elite welter title at the National Stadium on Saturday night.

The World Junior bronze medallist who boxes out of the Oughterard BC in Galway beat Wexford’s defending champion Dean Walsh in the last-four and is one in away from one of the ultimate belts in Irish boxing.

McKeever scored an impressive win over Tony McGlynn in the semi-finals. 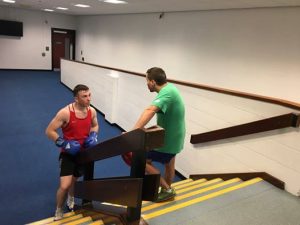 The Oughterard BC, since its foundation 56 years ago, have yet to claim an Elite title, but there have been some near misses.

Thomas Lee and Marvin Lee both lost two finals apiece to Paul Hyland and Ken Egan in 2002 and 2003.

Two Irish Elite Championships – as is the case this year – were run twice in 2003 in the build up to the qualifiers for Athens 2004. Andy Lee was Ireland’s only representative at the 28th Olympiad.

Molloy, meanwhile, said he was thrilled with his semi-final win over four-time Elite champion Walsh, but that the job is not done yet.