All seven Irish referees and judges (R&Js) sitting the recent AIBA 2-Star Referee and Judges Course and Exams got the decision, IABA National Registrar Stephen Connolly is delighted to report.

The Course and Exams were run in conjunction with the Monkstown BoxCup and in collaboration with the IABA in Dublin in late June and July this year and was the first such AIBA R&J 2-Star event to be hosted in Ireland.

Mr Pat Fiacco of Canada and Mr Zoltan Szalma of Hungary were the two International Boxing Association (AIBA) tutors at the course location in the Louis Fitzgerald Hotel and Monsktown BoxCup. 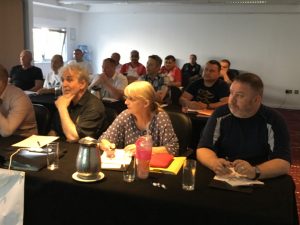 The AIBA last year launched plans to increase the number and standards of R&Js in order to maintain and create the best officials at all levels worldwide.

Dominic O’Rourke, President of the IABA, hailed all concerned.

“Congratulations to all seven Irish referees and judges on completing the course and passing their exams and to all who completed the course and exams,” he said.

“Fantastic achievements all round as all seven Irish referees and judges completed the course and exams and all seven passed with flying colours.”

“Well done to all concerned,” added Stephen Connolly. “It is a detailed and demanding course and exam and all seven Irish participants did exceptionally well.”

(Images from the course and exam at Louis Fitzgerald Hotel)