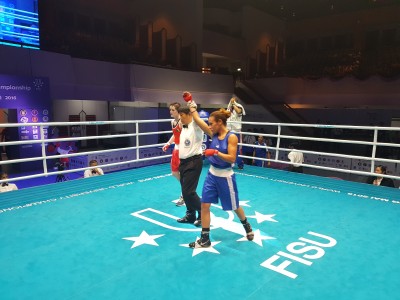 Ceire Smith and Gary McKenna lost out in their bids to join Christina Desmond and Kenny Okungbowa in the semi-finals of the 7th World University Championships in Thailand this morning.

The Irish pair dropped verdicts to France’s Wassila Lkhadiri  and Temirian Osmonov of Kyrgyzstan in the 51kg and 60kg classes at Mai Chaing University.

Smith, aiming for a semi-final meeting with Japan’s Sano Kawano, lost to Lkhadiri in the flyweight category over four, two minute rounds.

The multiple Irish Elite champion held her composure in the face of Lkhadiri’s constant aggression in the first two frames of today’s encounter, finding the target with well-timed combinations, but eventually bowed out on a split.

McKenna was involved in a high-tempo duel with Osmonov over three, three minute rounds in the lightweight class. The evasive Kyrgyz connected with some slick shots throughout, while McKenna’s constantly took the fight to his opponent and detonated some big punches off both hands going down the final stretch of a see-saw encounter. 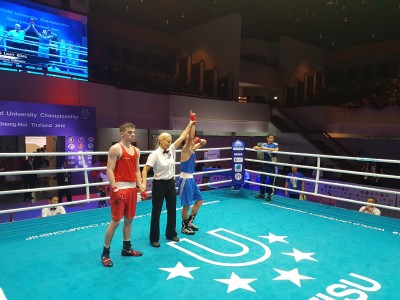 Desmond and Okungbowa will now carry the flag for the Irish Athletic Third-Level Boxing Association into Thursday’s semi-finals.

Both athletes are guaranteed at least bronze at the tournament, Ireland’s first medals at this level since the inaugural World University Championships in 2004.

“Ceire was disappointed with how she boxed as she knows she has more class and quality than she showed on the day. Some days it just doesn’t happen!,” said Irish coach Paddy Gallagher.

“The Kyrgyzstan boxer was clever in his movement and is deceptively clever in what he does. Both Irish boxers left the ring intact and healthy and will  fight another day.”

He said: “Ceire and Gary gave it everything they had, but it just wasn’t their day. They can both be very proud of their efforts as I am of them. Let’s hope that the Irish fortunes change for the rest of the week.”

Pictures: Smith and McKenna and opponents in today’s quarter-finals.