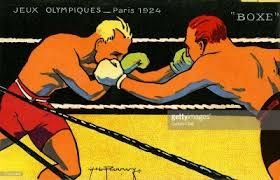 Tipperary’s Paddy Dwyer wrote Irish boxing into the history books after recording our inaugural win at the Olympic Games in 1924.

Ireland entered the Olympics for the first time independently at Paris 1924, and Dwyer, nicknamed Rocky, beat Great Britain’s Richard Basham in the preliminaries and followed that up with a favourable decision over Dutch welterweight Anton Cornelius.

He then KO’d Francois Stauffer (Switzerland) in round three of their quarter-final before being stopped in the third frame by Argentina’s Hector Eugen Mendez – who was beaten by John Delarge of Belgium in the final – in the last four.

Dwyer’s loss is officially recorded as a TKO3, but, according to reports, the Irish fighter had to retire with a deep gash in his forehead because of his opponent’s illegal use of his head.

The last-four finish would have been enough to have earned the man from the Premier County a bronze medal under today’s rules governing the awarding of Olympic silverware.

However, before the 1952 Games, losing semi-finalists had to box-off for bronze.

And Dwyer lost to Douglas Lewis (Canada) in the contest for third place on a walkover because of the injury.

Cork’s Willie “Boy” Murphy, a boxing coach in Clonmel, also recorded a win for Ireland at the 1924 Games, the Army middleweight beating Poland’s Jerzy Nowak before losing to Leslie Black of Canada in the quarter-finals.

The “Boy” was born in India to Cork and Waterford parents and claimed an Egyptian belt in the middleweight class when he was just 17.

Dwyer, Murphy, Myles McDonagh, Robert Hilliard, Mossy Doyle, PJ Kelleher and JC Kidley represented Ireland in the boxing event in Paris. Doyle was beaten by Jackie Fields, who was advised to change his name by his coach, as his real name, Jacob Finkelstein, didn’t sound “tough enough” for a boxer.

Meanwhile, the middleweight final at the 1924 Games was not without controversy as Great Britain’s Harry Mallin, who had won gold at the 1920 Olympics in Antwerp, was beaten in the quarter-finals by Roger Brousse of France.

However, Brousse was disqualified on appeal after medical evidence suggested that Mallin had been bitten during their last-four clash. Mallin, who retired unbeaten as an amateur and never turned pro, then advanced to beat John Elliot, also of Great Britain, in the final. Nations could enter more that one boxer in each weight in Paris where the referee sat outside the ring on a high stool.

Kerry-native Hilliard was one of the more colourful characters with the Irish squad. The Irish Olympian and Trinity College student was the only non-army boxer with Team Ireland and almost ironically, and tragically, in that context he was the only one to fall in battle.

The Killarney-native and Irish Elite champion was, at varying times, a Church of Ireland pastor, Marxist, Atheist, journalist, boxer and soldier in his short life. He volunteered for the Connolly Column for the Spanish Civil War and died fighting for the International Brigades in 1937.

According to reports, Hilliard’s battalion suffered heavy casualties fighting Franco’s forces in the Battle of Rio Jarma on February 12, 1937, and Ireland’s first Olympic bantamweight died of his wounds five days later in a field hospital.

Nicknamed the “Boxing Parson”, Hilliard is namechecked in the Christy Moore song Viva la Quinca Brigada, a tribute to the men who fought in the Spanish Civil War.

“Bob Hilliard was a Church of Ireland pastor; From Killarney’ cross the Pyrenees he came.”
.
Scotland-born James’ Tancy’ Lee, an army instructor and former British champion, was Irish head coach at the Paris Olympics.

Ireland’s chief seconds, given that most of his squad were army men, said his job was to “teach men to fight without bullets.”

Paddy “Rocky’ Dwyer died in 1948 in Thurles. A plaque was erected to the first Irish boxer to reach an Olympic semi-final on Limekill Lane in 2002. Rocky finished in 4th spot at the 1924 Games.

Twenty-seven nations, represented by 181 boxers, competed across eight weight categories in the boxing event at the 1924 Olympiad.

The USA finished on top of the medals table after claiming two gold, two silver and two bronze medals in the boxing ring in the French capital.

All of Ireland’s athletes at the 1924 games received participation medals.

Team Ireland didn’t win any medals in the ring in 1924, but the men of 1924 left their calling card. Ireland was now an Olympic boxing nation.