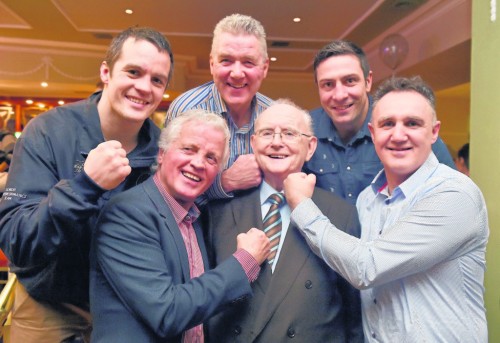 When Jim O’Sullivan won his first Irish Elite title in 1980, the average wage was €104 a week in today’s currency. By the time he finished collecting Elite belts in 1990, the average weekly wage had risen to €283 a week.

Roman heavyweight Julius Caesar, according to English southpaw Willie Shakespeare, ignored the advice of a fortune teller to beware of the Ides of March back in the day and ended up KO’d, permanently, in the middle of the month!

But O’Sullivan, boxing out of the St Patrick’s BC in Enniscorthy, didn’t have any issues with the Ides of the third month of the year as all his ten National Elite titles were claimed in March – except 1983 when he was injured – in three different weights between 1980 and 1990.

In 2011, as part of the Centenary celebrations of the Irish Athletic Boxing Association (IABA), the ten boxers with the most Irish titles were honoured in Dublin.

London 2012 and Rio 2016 Olympians Darren O’Neill and David Oliver Joyce had since improved their haul of Irish Elite belts to six apiece since that commemorative ceremony.

Egan claimed his belts consecutively, while O’Sullivan missed the 1983 Elite Championships because of a hand injury. His modest reaction to having his achievements described as extraordinary was: “I was good at running!”

The ten-time Irish Elite champion revealed that he had made up his mind in advance, win or lose, to hang up his gloves at the 1990 Championships where he beat Lee Mervyn to become the first Irish boxer to hit double figures.

“That was my last fight, but I decided well before that that I was going to retire. I knew that once I won that night I was retiring. I trained very hard from those Championships, said the Wexford southpaw.

“I would be out of bed at three in the morning to do the roadwork. Boxing is very demanding at that level and it can in many ways be quite a selfish sport. I knew going into my last Championships that my conditioning wasn’t going to let me down, that if I was beaten that it would be by someone that was better than me.

“Ger Lawlor, Mick Queally and Brian Byrne were excellent boxers, very tough. Lee Mervyn had knocked out a few opponents on the way to the final and I knew I had to be careful with him. Jim Ingallas was another fine boxer who won the heavyweight title at the Stadium in the early 1980s. He was an American lad working in Shannon Airport and boxing out of Limerick.”

O’Sullivan’s advice to younger boxers is to listen to your seconds.

“I had Bernard Dunne (from Enniscorthy) as my coach and he taught me everything. He calls himself the “real Bernard Dunne,” he joked.

“Young boxers should learn the art of self-defence. Boxing is a sport where you hit and try to not get hit. Listen to you coaches, train hard and don’t do silly things.”

O’Sullivan, who beat Joe Egan, Mike Tyron’s sparring partner, in the 1985 final at the Stadium, represented his country 52 times.44 of those caps were at Elite level and 8 in U/19 internationals. He revealed that his wrist was broken for most of his title wins.

“I cracked a bone in my left wrist before the Europeans in 1981. I had it looked at by a doctor, but they couldn’t find anything. But every time I punched I could feel excruciating pain.I had it looked at again a few years later and my wrist had been actually broken for most of the ten titles.

“I’ll be at the Championships this year. I’m looking forward to seeing the young talent coming through the ranks, and, as usual, I expect there will be a few surprises at the National Stadium this year. There always is,” added the man who was never beaten at an Irish Elite Championships.

The 2020 National Elites begin at the National Stadium on Friday.