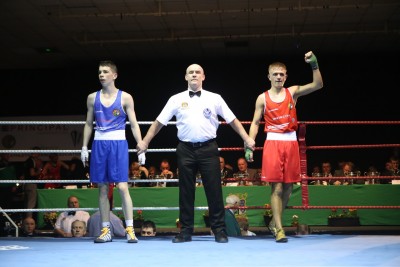 Kurt Walker, pictured (red), has been called up to the Irish squad for the European U/22 Championships in Brăila, Romania.

Al Morris, Secretary of the IABA, officially confirmed this evening that the current Irish Elite bantamweight champion has replaced James McGivern who has withdrawn.

The Brăila squad and National Elite panel are currently training at the Centre of Excellence in Abbotstown and leave for Romania on March 13th.

Walker believes that performance is the key to victory at the Danube port.

“I think I should do brilliantly. If I box to the best of my ability, I know 100 percent I won’t be beaten, so I’m looking to put in a good performance, said the ex-World Youth bronze medallist.

“This is all preparation for the European Elites in June, so I’m happy that I’m being kept busy and getting fights under my belt.”

Walker is also enjoying the return to training with the Elite squad in Abbotstown.

“This week has been brilliant, I still feel fit and sharp and I’m ready to go.”

Irish head coach Zaur Antia is looking forward to challenges of the 2nd edition of the European U/22s.

“Everyone is training very well and working hard. I expect that we will perform very well in Romania,” he said.