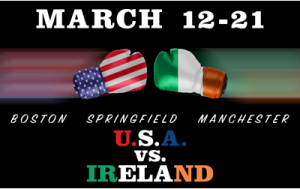 Bernard Dunne, IABA High-Performance Director, has commended Monday’s performances against the USA in the 1st leg of Ireland’s three-match American tour in Boston.

The hosts recorded an 8-4 victory; Kellie Harrington Kiril Afanasev, Kieran Molloy and Michael Nevin had their hands raised in victory for the visitors.

The Dublin, Galway and Laois quartet claimed National Elite titles last month at Dublin’s National Stadium, with Molloy, Nevin and Afanasev topping the podium at the  flagship tournament of Irish boxing for the first time on February 24.

Harrington won her eight Elite belt on the night

Meantime, most of the American athletes between the ropes in Boston will be included on the home squad for Thursday’s 2nd leg in Springfield, according to USA Boxing.

Team Ireland are selecting from a 17-strong panel under head coach Zaur Antia.

Former WBA World and Irish Elite champion Dunne, the Irish team manager in the US, believes that Thursday represents round two.

“We are extremely happy with how all our athletes competed. It is a young team which needs time to grow and learn and that is what this trip is all about, he said.

“After the event (Boston match) we sat down with our team and chatted about the performance. We could not fault any of them for how they performed. They will learn from this event and they will be better for it and that is exactly why we came here.

“We move on now to Springfield with a team that knows that they can compete with some of the best athletes in the world of boxing. Their confidence will have gone up and we look forward to round two.”

The final leg of the three-match series will be hosted at the Downtown Hotel in Manchester, New Hampshire on March 21