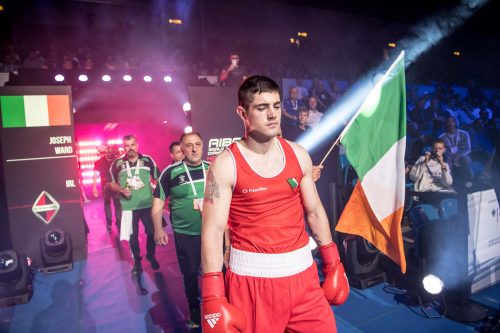 Azerbaijan was the leading European side in the medals table at the recent AIBA World Elite Men’s Championships in Hamburg, Germany, with the Ukraine and France in joint second spot, Russia 4th and Ireland 5th.

Azerbaijan claimed one gold and bronze,while the Ukraine and France took home one gold each. Russia secured silver and bronze and Ireland,courtesy of Joe Ward,silver.

Overall,Europe claimed 11 of the 40 medals on offer,down five from Doha 2015.

The medal return for Europe at Hamburg 2017 is the lowest this century,down from a high of 31 medals at Belfast 2001.

Ireland improved two places in the all-time medals table at Hamburg 2017 to joint 22nd with Poland. Both nations have an identical collection of 1 gold, 3 silver and 9 bronze.

The next two World Men’s Championships will be hosted at Sochi, Russia in 2019 and in New Delhi, India in 2011.

On the previous occasion the flagship tournament of international boxing was was held in New Delhi, Katie Taylor became the first Irish boxer to win gold at this level in 2006.