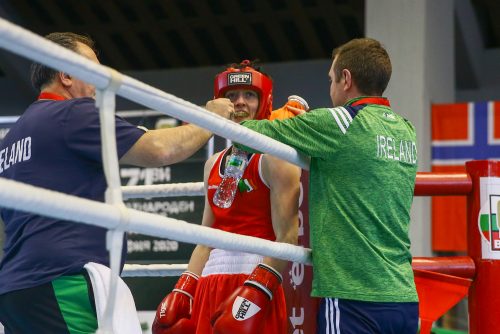 Kellie Harrington advanced to the last eight of the 71st Strandja multi-nations in Sofia, Bulgaria this morning.

Rygielska, a European Elite finalist, was busy throughout the three-rounder, but Harrington, occasionally switching from orthodox to southpaw, picked off enough clean shots and combinations to post an impressive win in her first competitive bout since injuring her hand at the European Games last June.

“That’s a quality opponent that Kellie boxed. She’s a European medallist, very aggressive. To win as well as she did I thought was a really good performance. It’s a real positive for everybody,” said Bernard Dunne, IABA High-Performance Director. 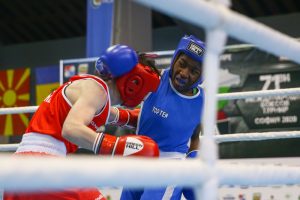 There was double disappointment for Ireland’s male welters after Galway’s Kieran Molloy and Antrim’s Aidan Walsh dropped decisions to India’s Sing Negi and Johnson Delante of the USA.

Light welters George Bates and Wayne Kelly experienced contrasting fortunes in the opening bouts of the afternoon session in Rings A and B.

Bates progressed from a fiery battle with Kosovan southpaw Shpetin Bajoku but Kelly was on the wrong end of a points reversal to Paolo Di Lernia despite peppering the Italian with head and body shots in the 2nd and 3rd rounds.

Dublin heavyweight Kiril Afanasev was withdrawn from this afternoon’s bout with Georgia’s Nikolaz Begadze because of a hand injury sustained in Tuesday’s win over Belgium’s Victor Schelstraette.

Michaela Walsh racked up win number two in the Bulgaria capital, the Antrim feather beating Spanish feather Jenifer Fernandez 30-27 across the board on all five cards on a unanimous decision.

Kurt Walker advanced at the expense of Brazilian feather Carlos Rocha. The European champion looked sharp and focussed throughout and staggered Rocha backwards with a sweeping hook in the third.

Italy’s Francesco Maietta progressed versus Ireland’s Dean Clancy, also in the feather class. Both men went about their business on the front foot in all three rounds of an opening an up tempo contest, but Maietta got the nod.

(Opponents to be confirmed)