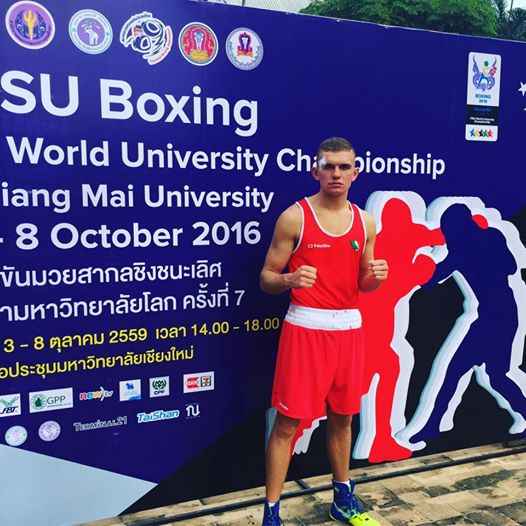 Conor Wallace, pictured after today’s bout, has vowed to bounce back after losing out because of injury at the World University Championships at Chiang Mai University today.

The Newry middleweight had to retire at the end of the second round with a nasty cut near his right eye after an accidental  clash of heads with Valerii Kharlamov of the Ukraine in Thailand.

Boxing superbly in the opening frame, Wallace floored the European Elite quarter-finalist and 2014 Ukrainian Elite champion with a massive left in the opening three minutes.

The scores were locked at 19-19 across the board at the end of the second frame.

“Absolutely gutted. Had to retire at end of second round due to a bad cut, after a nasty clash of heads, said the Irish Elite finalist.

“Dropped my opponent heavy in the first round with a big left hand but unfortunately it wasn’t to be. I will live to fight another day.

“Thanks very much to Paddy Gallagher for doing my corner and thanks to you’s all for the support. I wish the rest of my team mates the very best of luck for the tournament.

“Cut is stitched up, some time off now and plan the future, one sure thing: I WILL BE BACK!

Christina Desmond and Ken Okungbowa are in action in the last-eight tomorrow, followed by Gary McKenna and Ceire Smith on Wednesday.