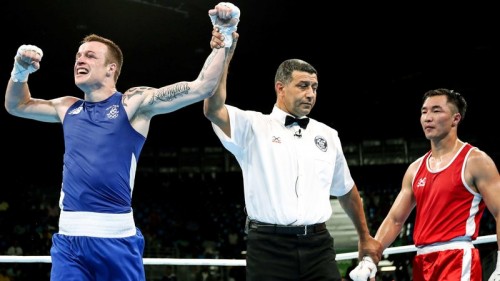 The All Saints BC man, who is included in the AIBA World rankings for the first time in the recently updated rankings, moves up a notch from welter to middle for the weekend’s clash at the home of Irish boxing.

Donnelly, who qualified for Rio 2016 through the World Series of Boxing (WSB), replaces John Joyce who replaced Conor Wallace in the 75kg Irish vest.

Wallace picked up a hand injury and was forced to withdraw, and Joyce, a late call-up, had to withdraw because of the flu.

It’s been an eventful year for Donnelly, with the Ulsterman winning two fights at the Rio Olympics before losing out narrowly at the last-eight stage to Morocco’s current  AIBA World Elite champion Mohamed Rabbi who claimed welterweight bronze in Rio.

Rabbi, incidentally, has since switched codes with Cork manager Gary Hyde. The World, WSB and African Confederation champion is due to arrive in Cork on January 5th and will help train some of Cork’s talented young prospects at the Cork Board Centre of Excellence in Churchfield ahead of his pro debut in his native Casablanca in February.

Donnelly said: “I’ll fill in (moving up to middle) no problem. I was down training in Dublin last week and I felt good enough so I’ll take the fight no problem at middle.The fight will shake off the cobwebs and do me no harm. I’m looking forward to it.”

Team England are due to arrive in Dublin tomorrow.

Tickets for Friday’s international are available on the door at €10 per adult and €5 per child. Pre-pay tickets available through IABA. Contact eimear@iaba.ie or (01) 453 3371. Group specials available for 10 or more people.

Meanwhile, congratulations to the winners of free tickets for the last international of the year versus England.

Each of you can bring two friends with you. To receive your tickets please contact us via Facebook or ring us on 01-4533371