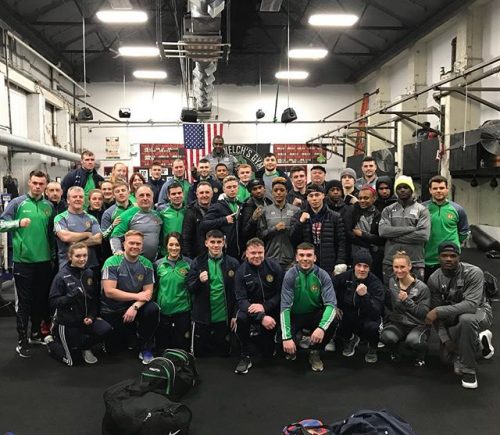 Irish and USA squads in training camp in Boston

The USA and Ireland shared the spoils in the final edition of their three-match international series in Manchester, USA tonight.

Kellie Harrington, Wayne Kelly, Caoimhin Ferguson and Kieran Molloy had their hands raised in victory for the visitors.

The eight-bout meeting, replicating last week’s encounters in Springfield and Boston, was close throughout with five split decisions separating the contestants on a see-saw evening in New Hampshire.

Harrington boxed well within herself to take her second victory of the tour, and a second win over New York’s Stacia Suttles, while Aoife Burke, who took a standing count from a body shot in the second, finished strong versus eventual victor Leah Cooper.

Francis Cleary was unlucky not to get the nod against James Browning at lightweight. Browning won the first, courtesy of a flashing hook on the ten-second clapper, but Cleary found the target with three sweeping lefts and a crisp combination going down the final stretch following an even second stanza.

Wayne Kelly, who had two split decision go against him last week, deservedly won this evening versus Adrian Benton to level the match at 2-2 and Caoimhin Ferguson edged the visitors ahead for the first time on the tour at the expense of Charlie Sheehy, the Antrim light-welter putting in massive final round to impress two of the three judges.

Molloy detonated some big backhands in rounds two and three in his all-southpaw meeting with Freudis Rojas Jr. to ensure that Ireland could not be beaten on the night.

Nikita Ababiy and Richard Torrez claimed the final two wins after tight encounters with Gerard French and Dean Gardiner to level the match at 4-4.

The Paddy Donovan versus Quinton Randall three-rounder, which would have been a repeat of last Thursday’s meeting in Springfield which Donovan won, was off after the Limerick southpaw picked up an illness.

“Performances have been excellent over the duration of the trip. It has been very worthwhile working with Team America and we are extremely happy,” said IABA High-Performance Director Bernard Dunne, the Irish team manager in the USA.

The Irish squad are due to arrive home Friday morning via Dublin Airport.