Lauren Kelly and Jude Gallagher will captain the Irish female and male squads at the World Youth Championships which begin in Budapest, Hungary next Tuesday.

Team Ireland will be using a four-strong women’s team and a three-strong men’s panel at the 81-nation tournament.

The Irish squad will have their final training session at the High-Performance Centre in Abbotstown, Dublin tomorrow and leave for Budapest early Saturday. 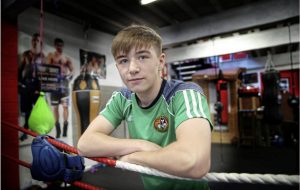 Both Irish skippers are European medallist and Irish champions.

“He’s a youth international boxer with a host of titles behind him so he’s got tremendous potential, especially when you think he will still be a youth boxer next year.”

227 men and 167 women are registered to compete in the Hungarian capital.