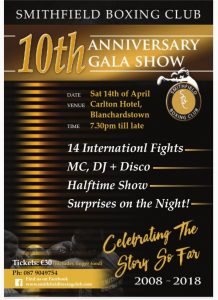 The club are joined in commemorating a decade of boxing by the best that Denmark’s Grindsted Boxing Club has to offer.

Afanasev, who is with the Irish Elite team in the USA for three meetings with America, hailed Smithfeild BC fans after claiming his first Elite belt at the home of Irish boxing last month.

“This is where it all begins to be honest. I’m feeling strong and confident. Thanks for everyone from coming down to support me. I could hear them from all corners. Onwards,” he said.

The MC on April 14th is Brian Daly, who is among the top corporate magic entertainers in the country, and was nominated as “Ireland’s Best Corporate Entertainer” at the Event Industry Awards.

Smithfield Boxing Club’s Head Coach and founder-member, Igor Khmil, says: “This will be a very special event, celebrating the first chapter in Smithfield’s BC’s story, from humble beginnings in 2008 to being the home of a 2018 National Elite champion.

“The cream of our boxing talent will be in action on the night, in what promises to be a very competitive, exciting card. We are looking forward to welcoming former members, new members, all of the club’s connections and boxing fans to Smithfield Boxing Club: The Story So Far. ”

Tickets are €30, and include bus transfers to Dublin City Centre and its environs. They are available from Ciara Plunkett on 087 904 9754.