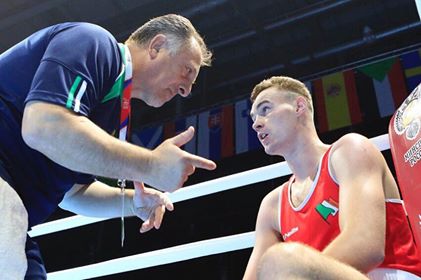 Eight champions were crowned at the 20th edition of the tournament since the inaugural World Championships in Havana in 1974.

Russian middleweight Gleb Bakshi secured gold this afternoon at the expense of Eumir Marcial of the Philippines.

World-class performance from Nevin with many observers believing that the Laois man, who claimed European Elite bronze this year, won rounds one and three against the new World No.1.

Likewise with Antrim’s Aidan Walsh who was shaded on a 3-2 split versus England’s No.2 seed Pat McCormack who took home silver from Ekaterinburg.

Irish boxing did have a person in the ring in today’s finals as Donegal’s Sadie Duffy refereed the feather clash between Cuba’s Jorge Alvarez and Uzbekistan’s Mirazibek Mirzakhalilov, which the Uzbek won.

The light-heavy title changed hands for the first time since Milan 2009 in Ekaterinburg. Cuba’s Olympic titlist Julio La Cruz won 81kg gold in 2011, 2013, 2015 and 2017 but his drive for five was derailed in the semi-finals and he had to settle for bronze.

Overall, it was a disappointing tournament for western Europe – with the exception of England’s silver and two bronze and bronze for France.

Uzbekistan topped the medals table while the medal breakdown per Continent ahead of the Continental qualifiers for Tokyo 2020 next Spring – and the final World qualifier in Paris next May – is Asia (15), Europe (10), Americas (6) and Oceania (1). 32 medals were on offer.

Meanwhile, the 2021 World Men’s Elites will be hosted in New Delhi.

The seven-strong Irish squad are due to arrive home via Dublin Airport at 10pm tomorrow evening.