The Monkstown boxing club claimed a total of seven medals at the Odivelas Box Cup in Lisbon, Portugal last weekend.

A total of 350 boxers took part in the international tournament, with Monkstown winning three golds, three silvers and one bronze in a superb tally for their eight-strong squad.

The haule helped the Dublin unit finish 3rd in the medals table; an incredible feat considering there were 70 different teams from 12 different countries taking part, including the national teams of France, Belgium and Spain.

First through the ropes for Monkstown on finals day was Paddy Stapleton. After wins against England and Scotland in the previous rounds, the high volume puncher made no mistake with a unanimous points decision to claim gold. 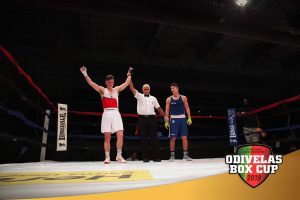 Next up was the unlucky Thomas Tobin, who, after a great victory in his semi-final against Portugal, had to settle for silver with his corner retiring the southpaw due to an elbow injury in the 2nd round.

The hard-hitting Sean Trant came into his final on the back of a TKO win over Portugal but had to settle for silver after a points reversal against his Italian opponent.

Irish U18 heavyweight champion Jack Marley, who has caught the eye after some big wins in the previous 12 months, claimed gold in style after stopping his loud English opponent in the 2nd round, his 2nd stoppage win in as many days.

Irish Elite champion Sean Mari, unfortunately, got a walkover at 49kgs and stepped up to 52kgs.

Waiting for Sean was a name familiar to Irish boxing in Spanish champion Martin Malina Salvador who once shared the ring with Irish boxing legend Paddy Barnes. After three very close technical rounds – with both boxers having success – it was the Spaniard who edged a 3/2 split.

Kenneth Doyle was the last Monkstown boxer into the ring. With wins against Italy and France in the quarters and semis, the young Irishman capped off an excellent competition for Monkstown, winning the Elite 64kg belt with a 5/0 win over Karim Saboundji of the Belgium national team.

Malo Davis and Jacob Marrer were the other two Monkstown punchers in action.

Jacob was unlucky not to get his hand raised against his Scottish opponent after an excellent performance but it was the Scot who got the decision on a 3:2 split decision.

Davis claimed bronze after a big win against his Spanish foe in the quarters, and despite having success in his semi-final, it was his Scottish opponent who deservedly got the decision.

“We were very happy with all the boxers performances throughout the tournament, and these international tournaments are a vital part of their development and progression to become top elite boxers,” said Monkstown coach James Doyle.

(Images and copy from Portugal courtesy of James Doyle)